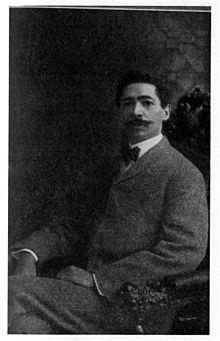 Will Marion Cook  (January 27, 1869, to July 19,  1944) was recognized for his originality as a composer and for pioneering progress and transformation in black musical comedy, popular music, and syncopated orchestral music. He mentored many musicians, most notably Duke Ellington, jazz musician, Margaret Bonds, composer and pianist, and Eva Jessye, choral conductor.  He studied violin at Oberlin Conservatory in the mid-  1880s and went on to study with Joseph Joachim in Germany.  Cook returned from Europe in 1890 and continued performing on his violin, took up conducting,  and began composing.  He attended the National Conservatory of Music and studied with Antonín Dvorák. Shortly thereafter, Cook collaborated with Paul Laurence Dunbar, poet, on a ragtime operetta called Clorindy, or The Origin of the Cakewalk.  It was the first all-black musical to appear on Broadway which introduced the style of syncopated song and dance to the art form. He continued making strides in musical theatre, vaudeville, and popular music.  His In Dahomey, written in 1902, was the first full-length musical written and performed by all black people on Broadway. It went on to be performed across the ocean, in London, and at Buckingham Palace.

Cook's use of syncopation and chromaticism in popular songwriting made him unique among his contemporaries.  He wrote many songs about love and patriotism, but he also wrote songs that focused on Negro stereotypes, African folk themes, and ethnic humor.

To read more detail about Cook go to the bottom box on this page. 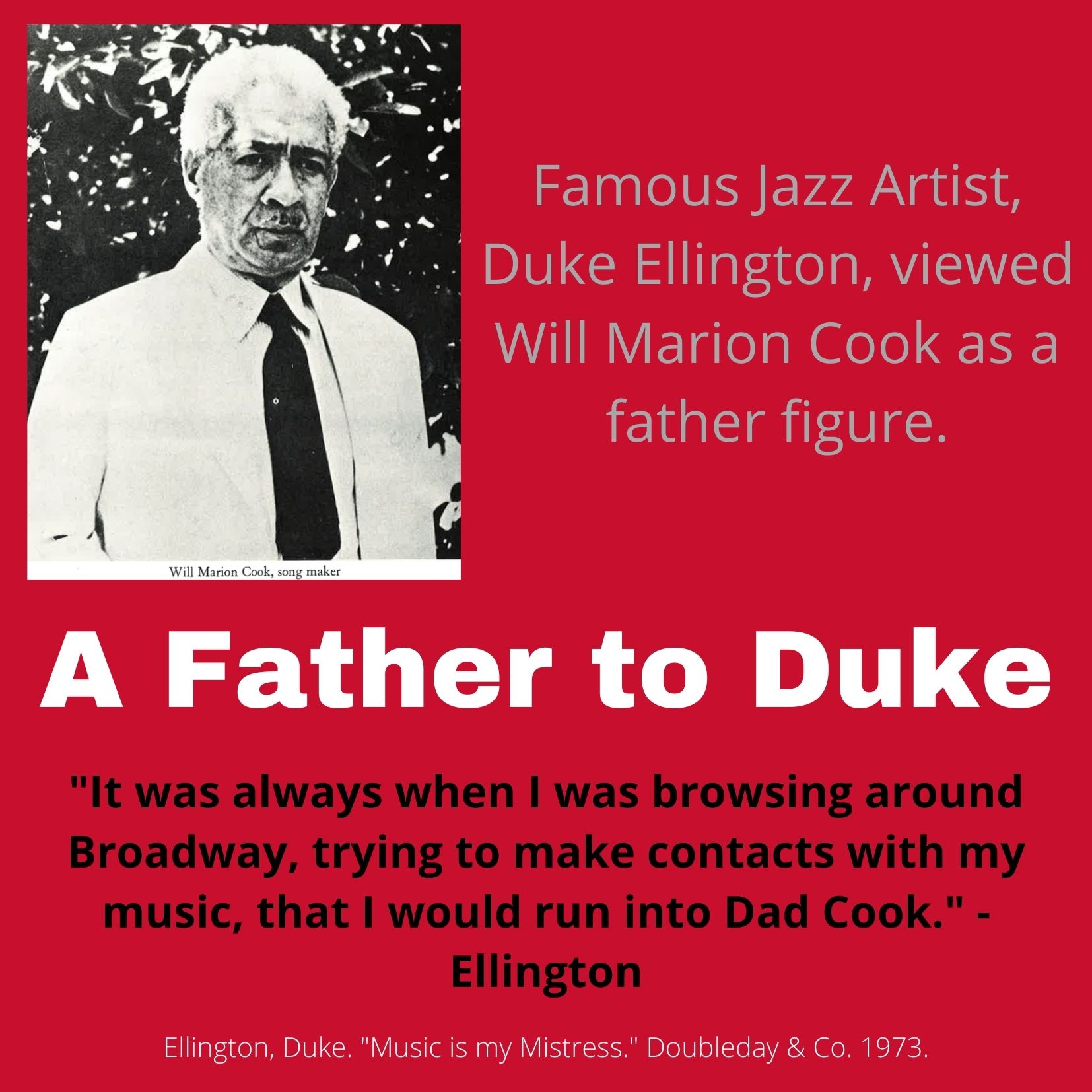 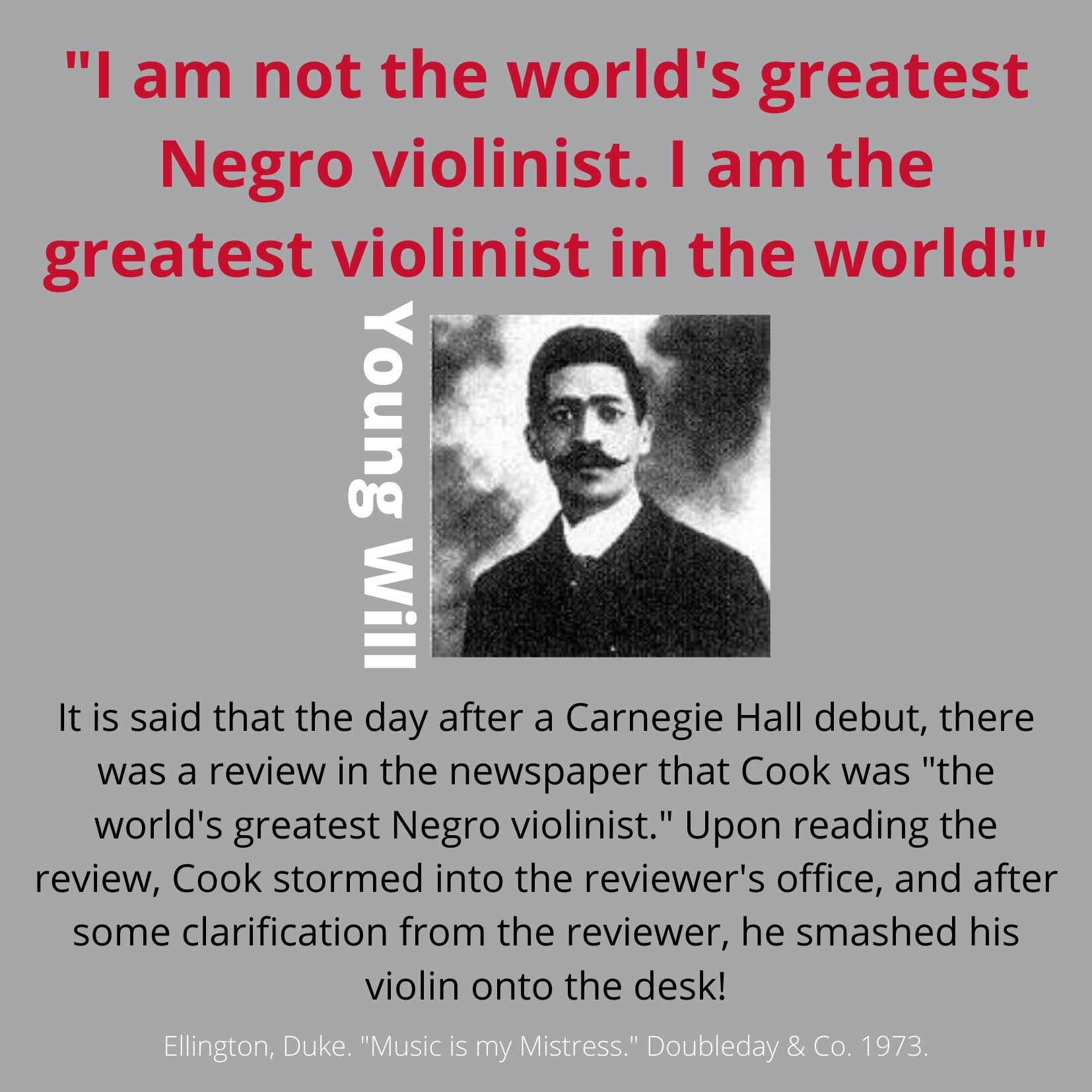 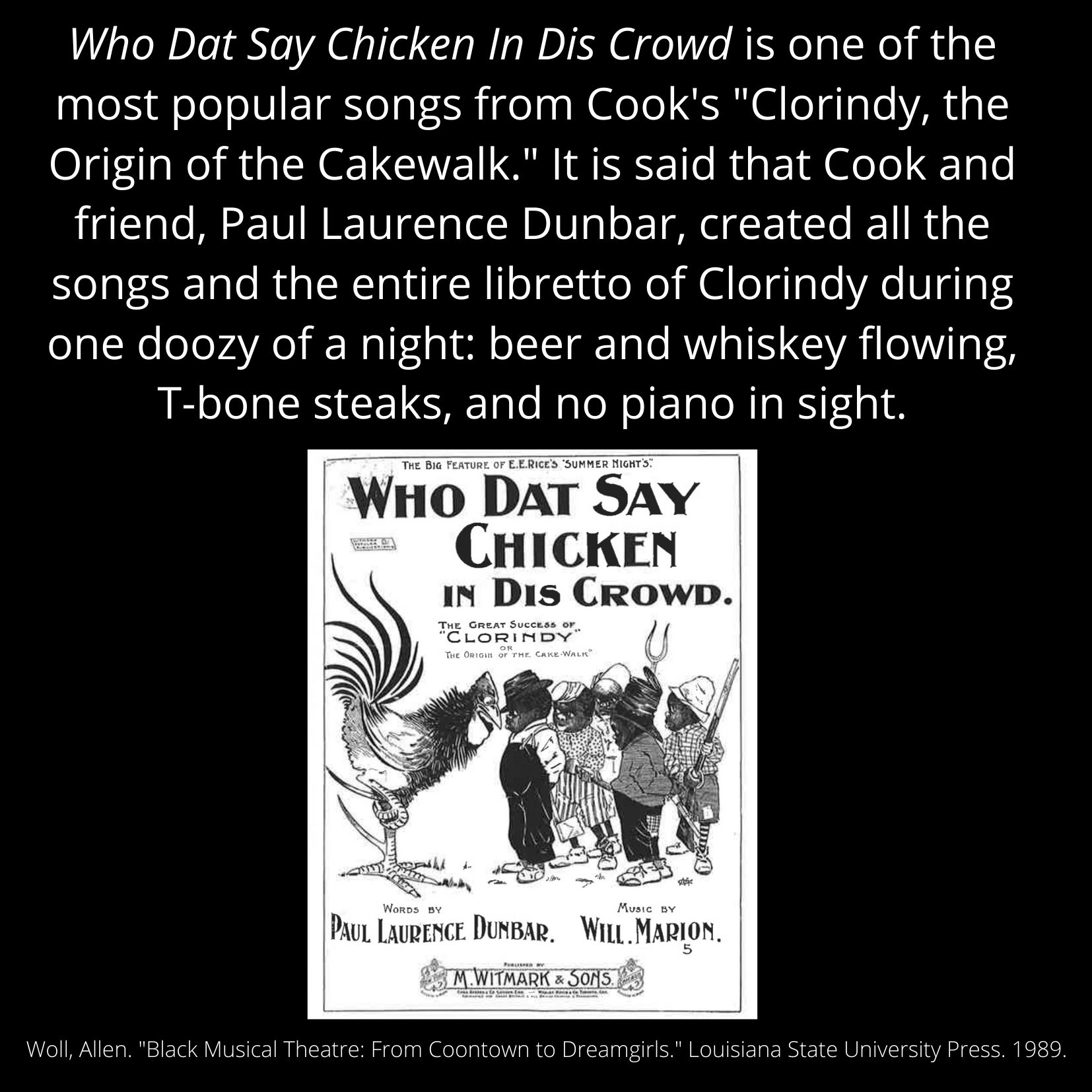 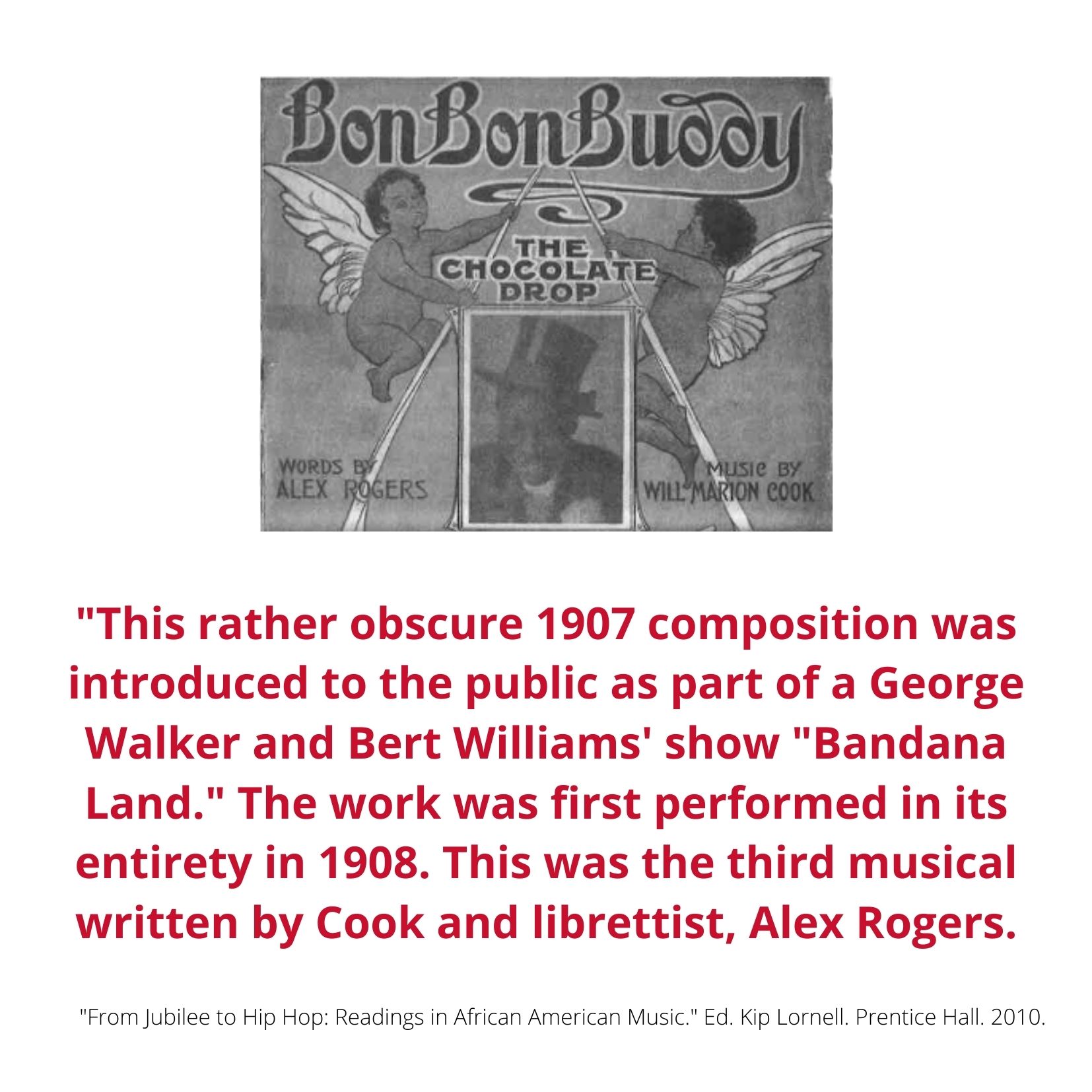 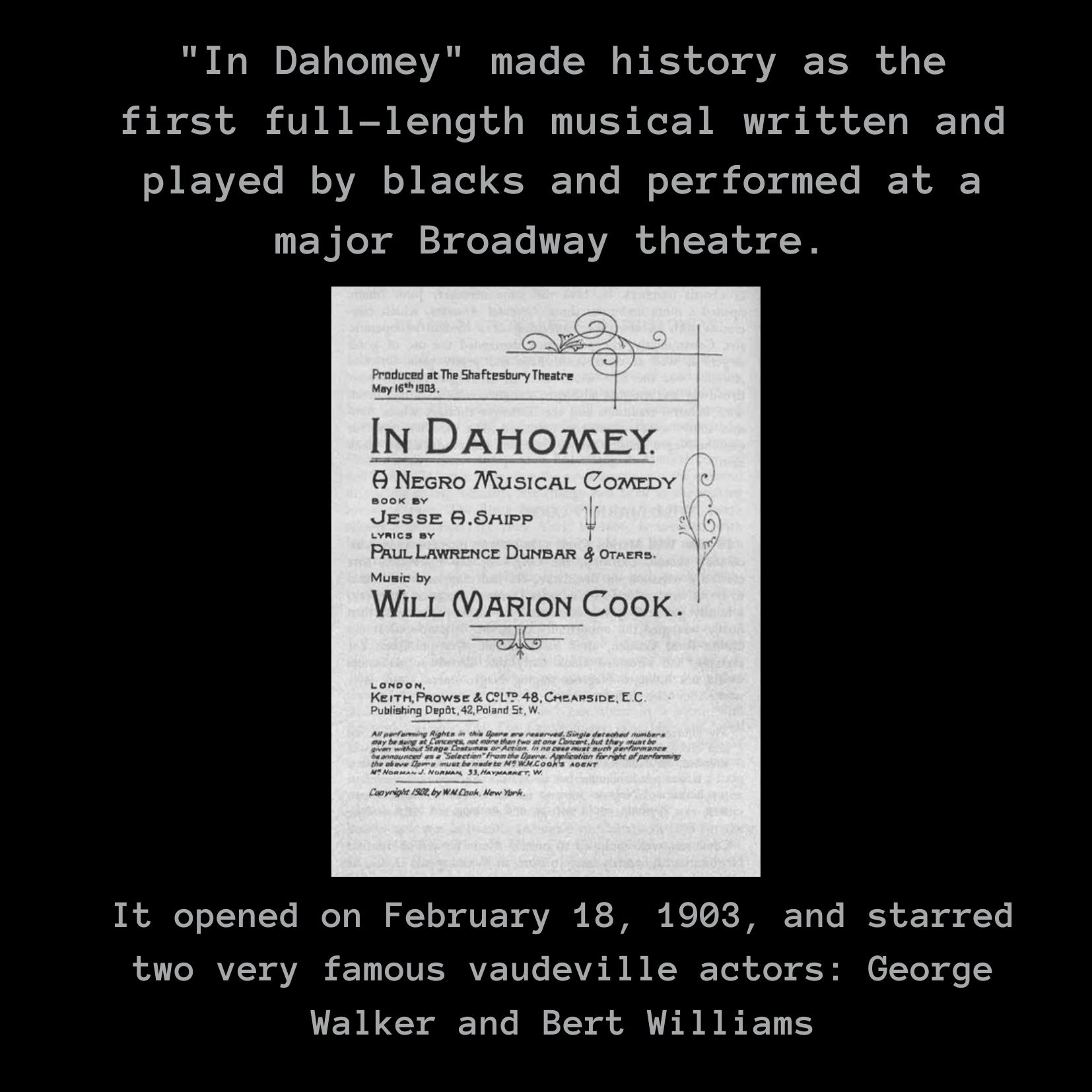 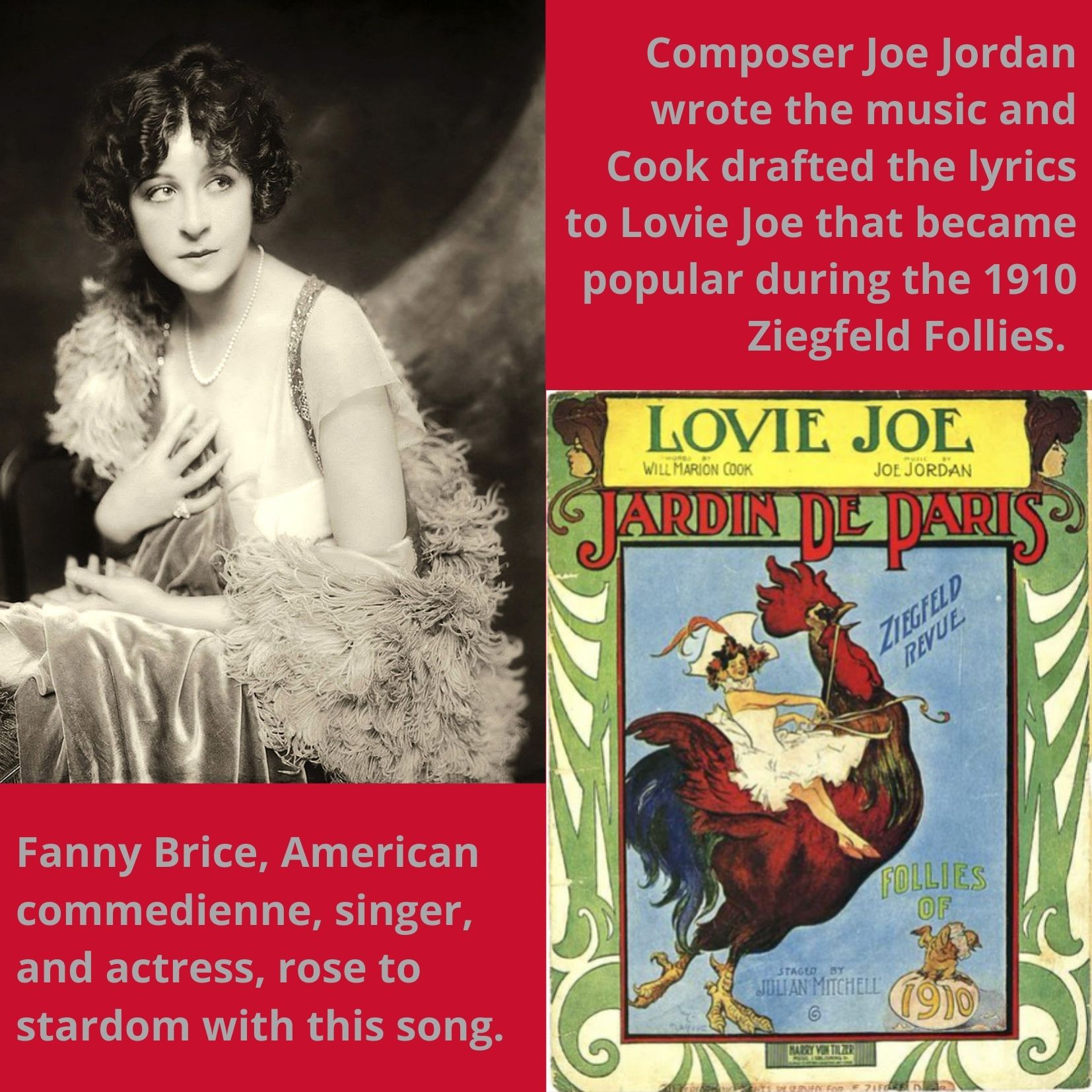 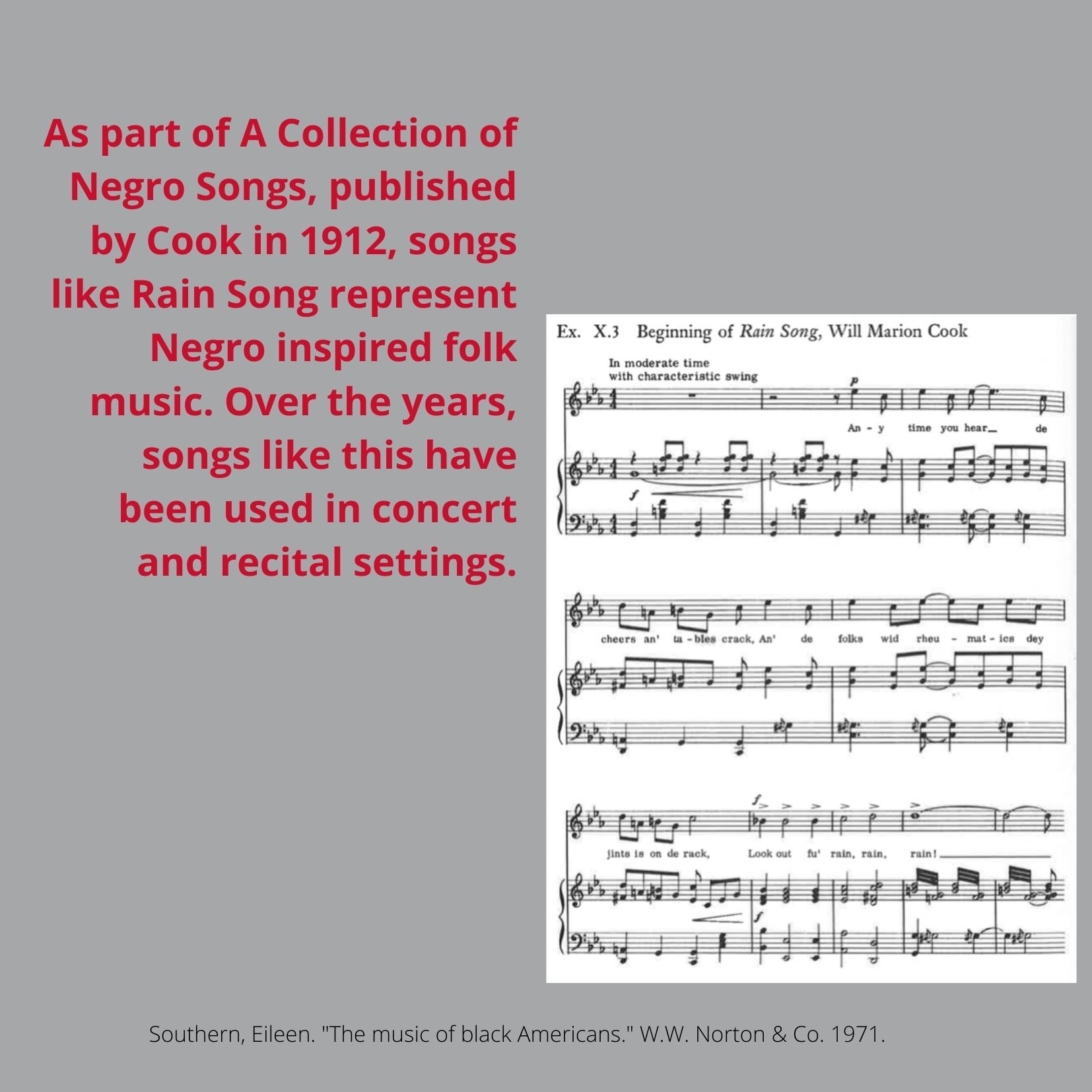 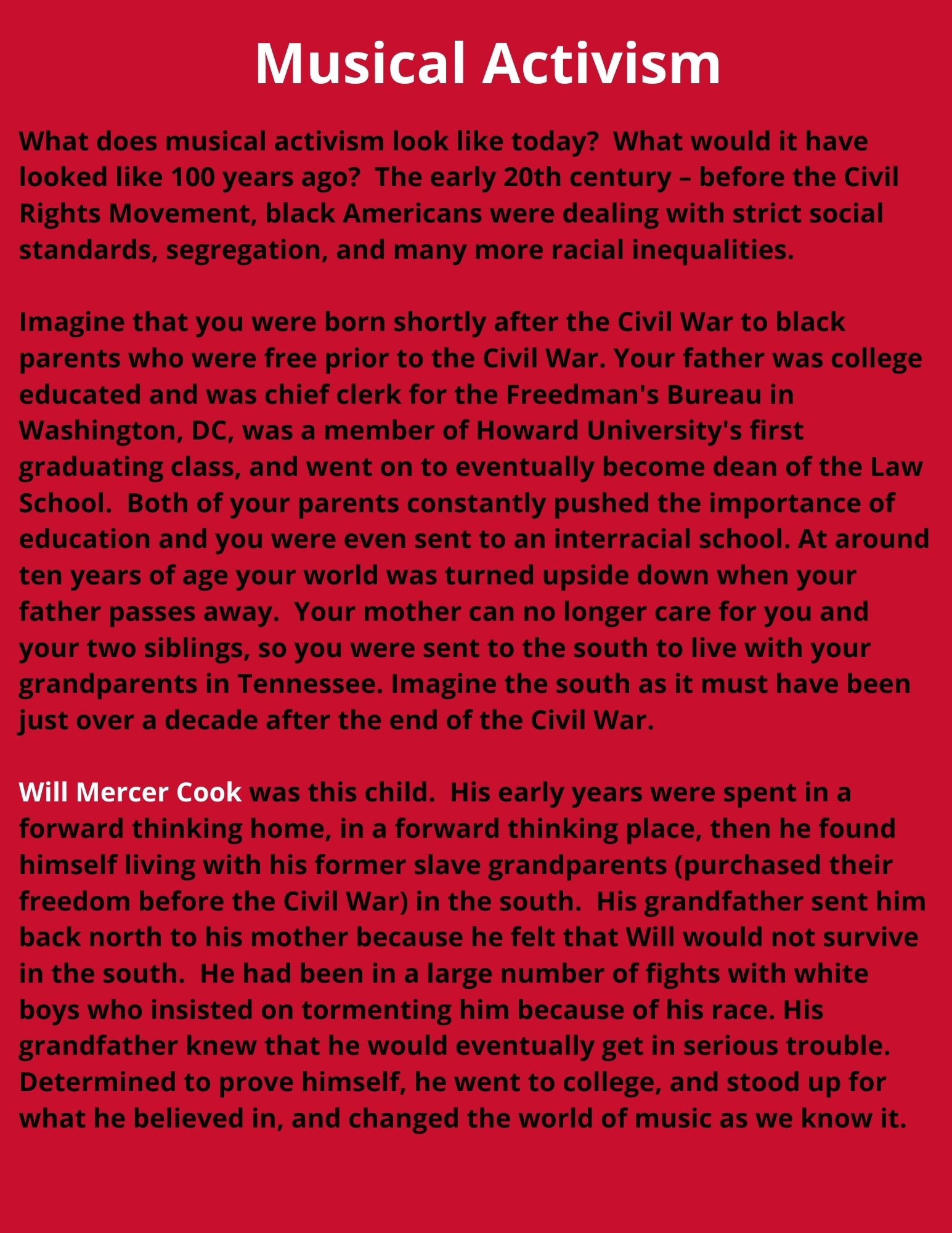 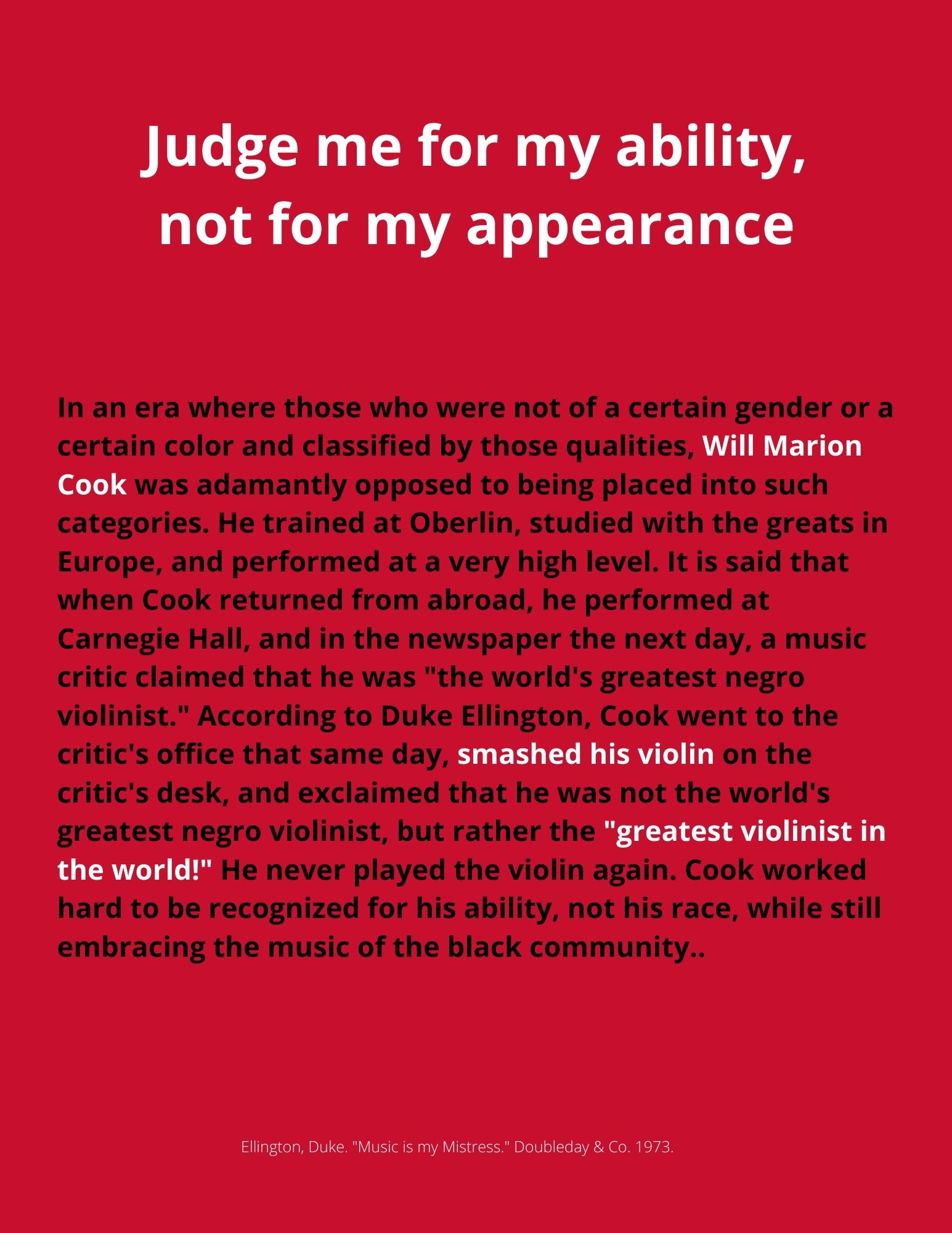 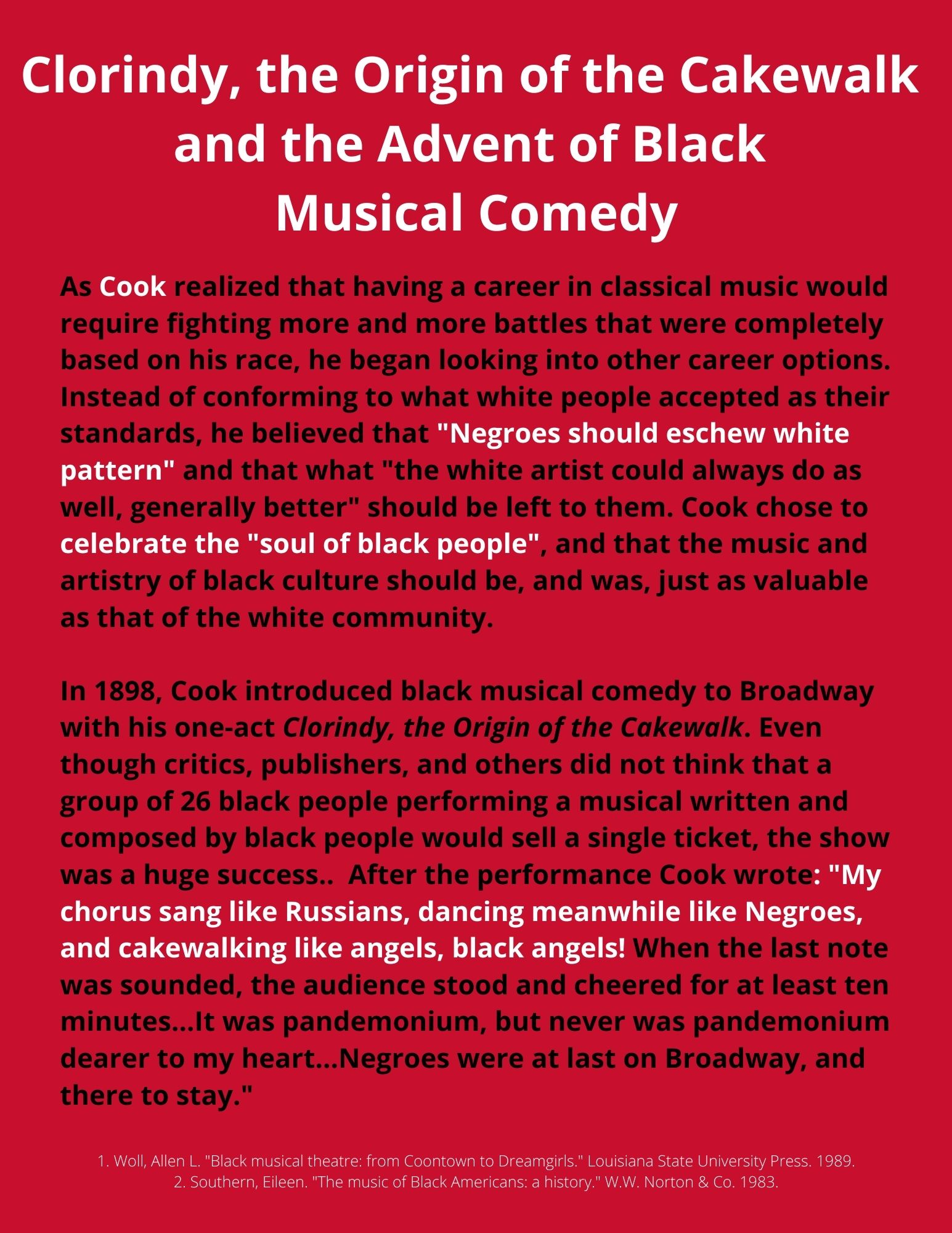 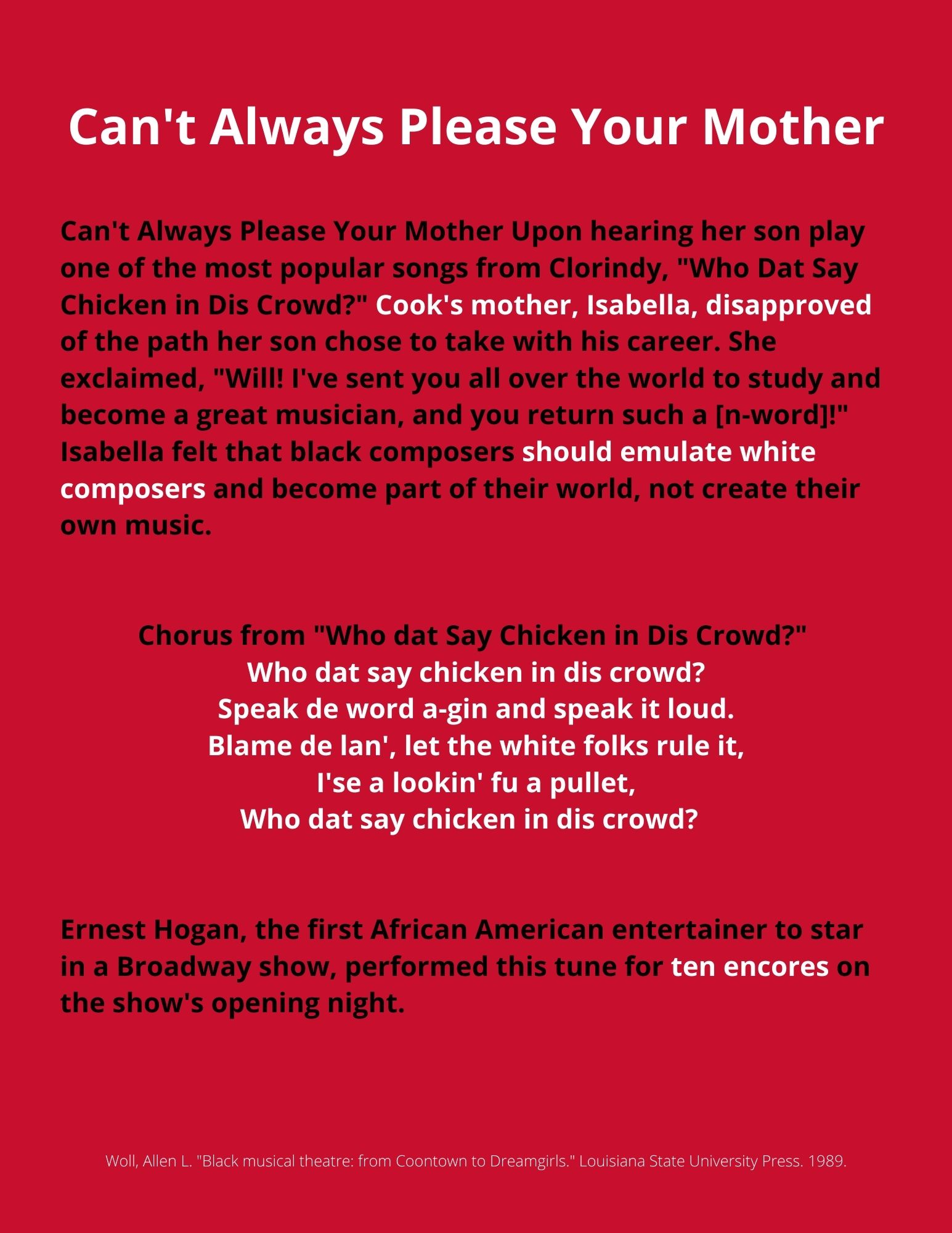 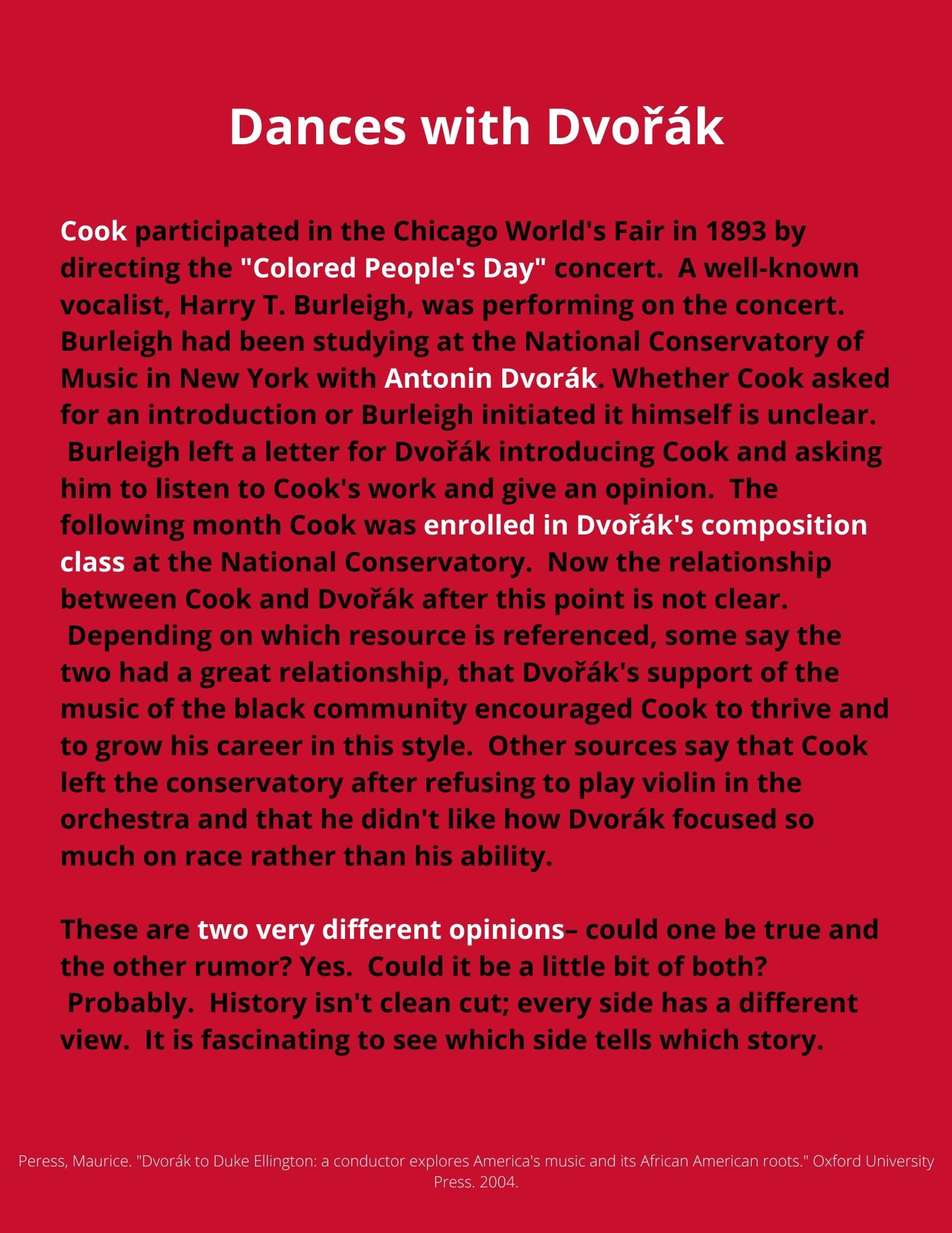 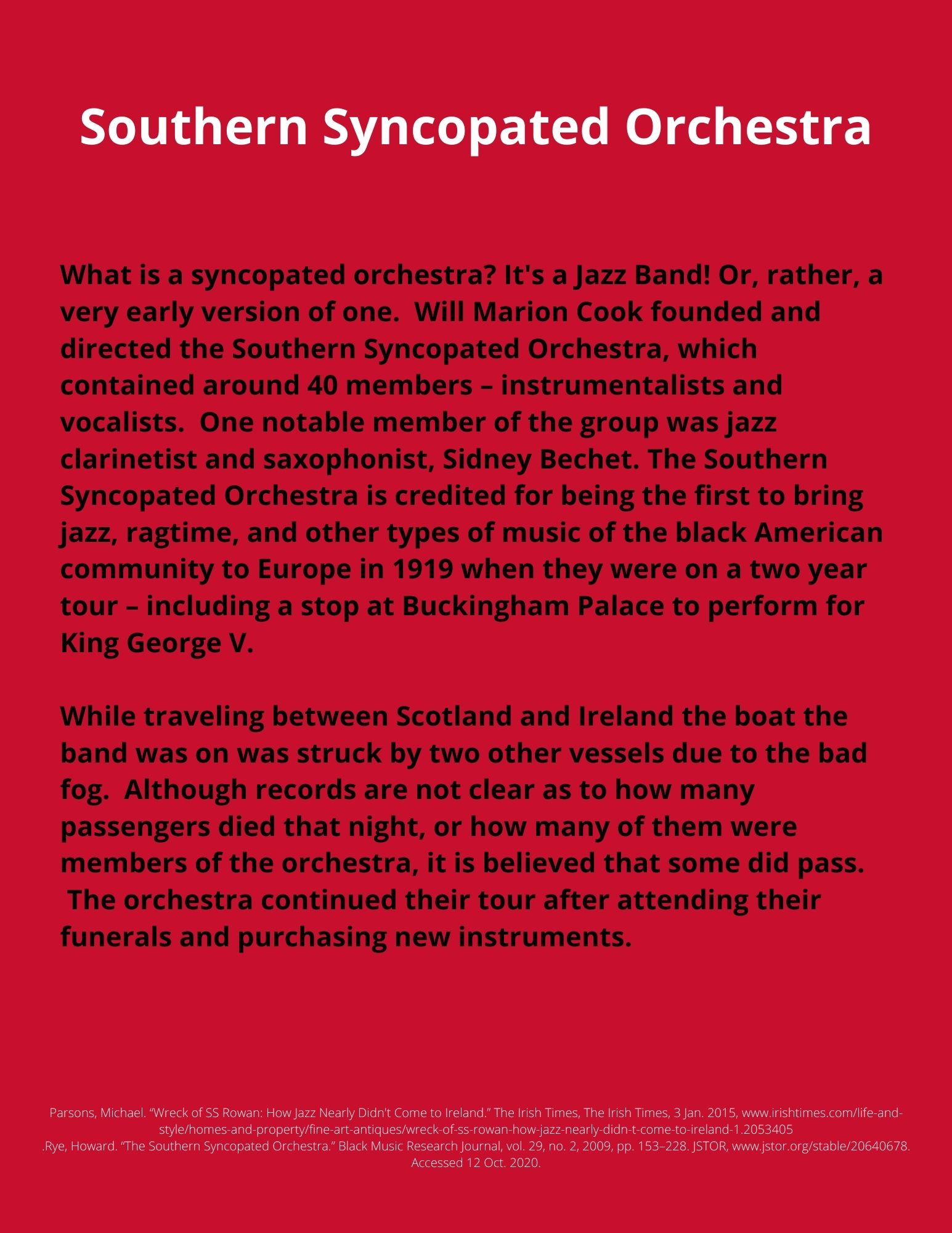 View a video of the Southern Syncopated Orchestra here

Will Marion Cook: His Background

Will Marion Cook: A Background

Will Marion Cook (1869-1944) was born shortly after the Civil war to parents who were free people of color before the war.  He spent his formative years with his college educated parents, Isabel and John Hartwell Cook, living in Washington D.C. John was a member of the first graduating class of Howard University, and served as chief clerk for the Freedman's Bureau, and eventually became dean of the Howard University law school.  Education was stressed during Will's early years. He and his siblings were even enrolled in an interracial school their father help organize.  Tragedy struck the Cook family when John succumbed to tuberculosis when Will was about 10 years old.  After desperate attempts to support her three children, Isabel sent Will to stay with her parents in Chattanooga, Tennessee.

This was Will's first experience living outside a forward thinking environment.  He heard the music of the southern black community for the first time, tried his grandfather's patience, and got into quite a bit of trouble with the local white boys.  His grandfather, fearing for his safety sent him back north to his mother.  Shortly thereafter, at age 14, Will chose to dedicate his life to music, and enrolled at his parent's alma mater, Oberlin, an unusual school at the time where blacks and whites (men and women) mixed freely in classrooms, church, and other establishments. Being noticed for his high level playing ability, his professor of violin first suggested he transfer to the conservatory in Cincinnati, but black students were not accepted there as they were in Oberlin.  The next suggestion was that he go to Berlin to study with Joseph Joachim. Friend of the family, Frederick Douglass set up a recital for Will to play as a fundraiser to get him to Berlin.  Will chose to play a highly technical piece to audition for entrance into the Hochschule für Musik, where Joseph Joachim taught.  He choked on the piece after being intimidated by younger students performing etudes by Fiorillo and Paginini to near perfection. Joachim asked Will to play something else, and a Beethoven melody that showed off his tone and musicality gained him access to the school.

Upon his return to the US, Will started an all black orchestra in Washington DC with the support of the Frederick Douglas as  president of the group.  The next big event in Cook's life was directing the "Colored American Day" concert which came into being after Fredrick Douglas, Ida B. Wells, and others protested the fact that blacks were not represented at the World's Fair. Cook and Douglas met with President Benjamin Harrison, and with his permission were able to program the event. This event led to an introduction to Antonin Dvorák made by one of Dvorák's students, Harry T. Burleigh.  Soon Will was studying at the National Conservatory in New York City.

Cook was known to have very strong feelings about race and discriminations he experienced. He was very outspoken about how he wanted to be listened to and criticized, for his ability as a violinist and conductor, and not the fact that he was black while doing both.  He didn't want to be the great black violinist – he wanted to be a great violinist.  He eventually came to the conclusion that he would never be seen as an equal when it came to western music.  He stopped playing violin and focused on the music he had heard throughout his childhood – music of the black community.

He began taking the existing tunes, developing the styles, and presenting them in formal fashions – printed sheet music for songs, musical theatre, and more.  He was an integral part of creating the music of the American black people, popular, and formal.  He wrote and directed the first all black broadway show, Clorindy, the Origin of the Cakewalk, which was a huge success even though critics and potential investors never expected anyone to want to pay to see it. He wrote many songs that were published and sold as popular music that people would gather around the piano and sing in their homes.  He founded the Southern Syncopated Orchestra which was a very early version of a jazz band, and brought ragtime and jazz to concert and dance halls, even taking the group to Europe and playing for King George V.  Will Marion Cook was considered one of the most outstanding composers of his time, and was pivotal in the shaping of American music and American musical theatre.

So why isn't he more well known?