Because Somebody Talked: Home 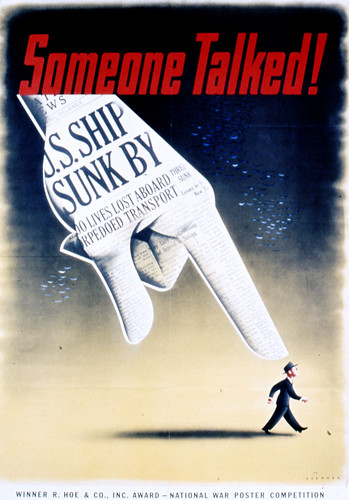 Determine the central ideas or information of a primary or secondary source; provide an accurate summary of how key events or ideas develop over the course of the text.

Objective:                   The students will be able to make a connection between the message of a World War II poster and real events.

Essential Question:     What is the relationship between liberty and security?  How does one balance those two important concepts?

Set Induction:             The students will look at the image of one of the WW II posters below and formulate a

question in regards to its message.

1. According to the National World War II Museum in 1942, the Office of War information (OWI) was established to produce posters, pamphlets, newsreels, radio shows and movies to persuade the public to support the war effort.  The posters that the OWI created were put up in railway stations, post offices, schools and apartment buildings.  A resident of DeKalb, Illinois, an inveterate collector, Mr. W.W. Embree had an extensive World War II poster collection and donated it to the Regional History Center.  Two posters from his collection provide the centerpiece of this lesson.

2. The letters that are highlighted in this lesson plan are ones that were sent by Robert Borden to his parents while he was in the U.S. Navy during World War II.  Robert Borden’s letters were censored several times in the course of his correspondence due to the fact that he was revealing the location or destinations of the vessels on which he was stationed.  Robert Borden was so eager to let his parents know of his location that he enlisted the help of a friend from the navy who was going through his home town of Rockford Illinois.  Borden asked his friend to deliver a letter to his parents that told of his location and destination as well as several other censorable pieces of information.  All of the correspondence is included in archives at the Regional History Center.

Activity: Part A: The Posters

3.      Have the students discuss their paragraphs with one another in their groups and come to a consensus regarding their poster’s message and then present their determinations to the class.

Activity Part B: The Documents

1.      Each student will pair off with partners.  The groups of two will each be given a numbered letter to read and analyze, using the questions from [Handout# 3] as a guide.  The students will share their analysis with their partners and compose a written paragraph long summary based upon their analysis. The students will mark their summaries with their letter’s number.

The partner groups will present their summaries in numerical order.  After the presentation of the documents, the students will discuss all nine of the letters in terms of their chronology.  The students will then compose an overall chronological narrative of the series of letters in a classroom discussion with the guidance of the teacher.

Activity Part C: The significance of the posters and the documents:

1.      The posters will be displayed on a screen for the class to view again.

a.       How are the documents and the posters related?

b.      Do you see the poster in a different light now that you have read and discussed the documents?

3.      The teacher will put the initial essential question back on the screen.

The students will revisit the essential question and write their own answer using what the resources they have interpreted in class to inform their answers.

The purpose of propaganda is to systematically promote particular ideas, doctrines, or practices.

Name- Calling—the use of derogatory or negative words.  It connects a person or a thing to a negative image or symbol. In this technique it is hoped that the audience will accept the connection without investigating the evidence.

Glittering Generalities—these are virtue words (good, democracy, religious, motherhood) for which we have deep seeded ideas. Words we believe in, live by, and are ready to fight for. This is dangerous because these words mean different things to different people. Propagandists will use these words to get people to choose a side or fight a war but their definition of the word may not be the same as yours. It is name-calling in reverse. Instead of wanting you to reject someone because of something negative they say, they want you to accept and support something because of what you support and believe in.

Example: If you are patriotic, you will fight in this war. Good people do this (fill in) and during WWII good mothers can and scrap.

Euphemism—this is used when propagandists make something awful or negative more palatable. Words that are bland or neutral are often used.

Example: civilian deaths are “collateral damage,” lying is “fabricating,” and murder is “liquidation,” and during WWII (and other times of war) death is “loss.”

Transfer—when the propagandist transfers the importance, power, or approval of something we respect and accept to something else they wish us to accept and respect. Symbols are often used.

Example: a picture of a cross or other religious symbol next to a politician, “science based” and during WWII they often used Uncle Sam in posters to show that something was “American.”

Testimonial—the recommendation or endorsement of something by a person whose opinion is valued (or who is famous). There is nothing wrong with someone qualified recommending someone or something but testimonials are often used in ways that are misleading and unfair.

Example: a doctor selling a medication on television, a famous singer endorsing a presidential candidate and during WWII President Roosevelt telling Americans to buy War Bonds.

Bandwagon—everyone is doing it and so should you. No one wants to be left out or ignored so people will join or agree when they believe “everyone” is doing it.

Example: peer pressure, joining a religious group or political party, buying a product or service and during WWII posters that said everyone has a Victory Garden, or scraps, or joins up.

Fear—the propagandist warns that something horrible will happen to the group or person if they do not follow a specific course of action. They play on fear and try to get you not to think.

Example: if you don’t vote for me we will be attacked by our enemy, and during WWII posters that said if you don’t conserve bacon fat, soldiers will die.

Is this an effective poster?

2.      What are the physical characteristics of the document?

5.      For what audience was the document written?

6.      List three things you think that the author wrote that you think were important.

8.      What evidence in the document helps you to know why it was written?  Quote directly from the document.